An appendectomy is the surgical removal of the appendix. It’s a common emergency surgery that’s performed to treat appendicitis, an inflammatory condition of the appendix.

Here are some FAQs answered!

What is the appendix?

The appendix is a narrow, small, finger-shaped portion of the large intestine that generally hangs down from the lower right side of the abdomen.

What is appendicitis and what causes it?

Appendicitis is a sudden inflammation of the appendix. Although the appendix does not seem to serve any purpose, it can become diseased and, if untreated, can burst, causing infection and even death. 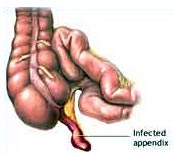 The infected appendix then must be surgically removed (emergency appendectomy) before a hole develops in the appendix and spreads the infection to the entire abdominal space.

What are the symptoms of appendicitis?

How is it diagnosed?

Several ways have been suggested to diminish the diagnostic error that occurs if diagnosis is based solely on the clinical picture of suspected appendicitis. In fact appendicitis is a disease, which can mimic most of the causes of abdominal pain as well as some of the chest diseases. Despite new x-ray techniques, CT scans and ultrasounds, the diagnosis of appendicitis can be quite challenging. So far the most accurate non-invasive method of diagnosis is ultrasonography but this is not totally reliable. The history and physical examination will generally lead to the correct diagnosis.

How is appendicitis treated?

What is a laparoscopic appendectomy?

The laparoscopic (minimally invasive) surgical technique involves making several tiny cuts in the abdomen and inserting a miniature camera and surgical instruments. As many as three or four incisions are made. The surgeon then removes the appendix with the instruments, so there is usually no need to make a large incision in the abdomen. The camera projects a magnified image of the area onto a television monitor which helps guide the surgeons as they remove the appendix.

What is the benefit of laparoscopic appendectomy?

Most cases of acute appendicitis can be treated laparoscopically. The main advantages are:

In most cases, patients can be discharged within 24 to 36 hours. By contrast, the hospital stay is typically two to five days for an open procedure.

Can every patient have a laparoscopic appendectomy?

Laparoscopic appendectomy may also be more difficult in patients who have had previous lower abdominal surgery and for obese patients. The elderly may also be at increased risk for complications with general anesthesia. We evaluate every patient to determine the appropriate type of surgery to perform.

What happens if the operation cannot be performed or completed by the laparoscopic method?

In a small number of patients the laparoscopic method is not feasible because of the inability to visualize or handle the organs effectively. When the surgeon feels that it is safest to convert the laparoscopic procedure to an open one, this is not a complication, but rather sound surgical judgment. Factors that may increase the possibility of converting to the “open” procedure may include:

What are the complications of laparoscopic appendectomy?

In an experienced hand, there are no specific complications directly related to laparoscopic procedure. However, if the surgeon is not trained in laparoscopy, then the chances of complications are listed below:

Dr. Nanda Rajaneesh has over 18 years of experience in surgical oncology and laparoscopic surgery. She is currently a visiting consultant in both Apollo Spectra Hospitals and Sakra World Hospital. She has operated many film stars & VIPS, both at regional and national level.